Guys, it’s all about the sauce, and this copycat TGI Fridays Jack Daniels Sauce is so finger-licking delish that you’ll want to put it on everything! A little bit sweet, a little bit tangy, a wee bit spicy, and with the amazing flavor of Jack Daniels whiskey, this sauce is ah-mazing and tastes just as good as what they serve in restaurants.

Years ago, my family and I lived in an apartment community right beside a TGI Fridays, and whenever we ate out that is usually where we went.  You might think it was the convenience that kept us going back, but that thinking would be wrong.  It was the Jack Daniels sauce that they used that kept us going back for more. If you’ve ever tried it, you know exactly what I mean – and you will be so eager to try this recipe.

I love how easy this Jack Daniels glaze is. Sure, there’s some measuring and simmering involved, but that’s not too hard. And, once it’s made, it’ll keep in the fridge for a week or more in case you can’t get to it right away.

In fact, make a double batch of this sauce because it’s just that darn good, and you can put it on so many different kinds of meats and even veggies. See all my suggestions below!

How to Make Jack Daniels Sauce

How to Use Jack Daniels Sauce

This is my favorite Jack Daniels wing sauce, but don’t limit yourself.  This sauce is good on anything, and here are some of my favorites:

This Jack Daniels sauce recipe will keep in the fridge in an airtight container for a week or a bit longer. I usually make a double batch – it’s just that good!

Does TGI Fridays Jack Daniels Sauce have alcohol in it?

Yes, there’s a tiny bit of whiskey in the sauce but the alcohol cooks out of it just leaving behind the incredible flavor.

This easy Jack Daniels sauce recipe is a bit sweet, a bit spicy, and you can taste the whiskey. It is thick, rich, and delicious!

Is this glaze the same as Jack Daniels BBQ sauce?

No, the BBQ sauce is different. This is a Jack Daniels sauce copycat recipe, just like the one they use in TGI Fridays. This is a whiskey glaze, not a BBQ sauce though it is really terrific on BBQ meats! 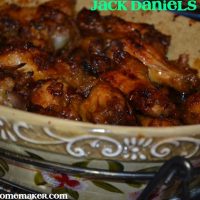 « Previous PostHomemade Strawberry Ice Cream
Next Post » The 127 Yard Sale – What You Need to Know!