Hearty, rich, delicious, and nutritious, this easy Mushroom Barley Soup recipe is a keeper! This is the perfect soup on a chilly day, and it’s loaded with veggies and tender barley, so it’s as satisfying as it is tasty.

I love soup; I love how flavorful they are, and this Mushroom Barley Soup is no exception. The barley in it soaks up all the flavor from the broth, and the mushrooms are meaty and tender. There are many veggies in this soup, making it a great pick to sneak some extra vegetables into the kids.

There’s nothing better than a pot of soup cooking low-and-slow on the stovetop. The kids would come home and rush to the stove, begging me for a bowlful of soup as a snack, and we would often have soups for dinner – not just lunch.

This is an easy soup to make, and it’s ready in under an hour. Plus, it’s made in one pot, so cleanup is a breeze.

If you’ve never had barley, you’re in for a treat! When cooked, the barley is tender but still with a bit of chew, and it soaks up all the flavor from the broth.

Barley is a type of grain used in breads, drinks, stews, soups, and more. It is loaded with fiber, vitamins, and minerals.

Barley is available in two forms: hulled and pearled. Pearl barley is most commonly found, and it is the grain with the hull and bran removed. It is more processed than hulled barley, and takes less time to cook, but it also has less nutrition than hulled barley.

In this recipe, I suggest you use pearl barley, as it is the easiest to find and cooks more quickly.

How to Make Mushroom and Barley Soup

You only need 1 pot for this delicious soup!

There are many different ways to change up the flavors in this Mushroom and Barley Soup recipe. Here are some of my favorites:

Give me a big bowlful of soup, and I’m a happy gal. I love this soup all on its own, but I’ll also serve smaller portions of it as an appetizer before a casserole or with a roast or salad, and I also like to pair a bowl of this soup with a delicious sandwich.

Barley Mushroom Soup will keep well in the fridge in an airtight container for 4-5 days. However, barley will keep absorbing the liquid in the soup, and after a few days, your soup will look more like a stew.

If you have leftovers, I urge you to strain the soup – package the soup broth separately from the chunks of veggies and barley. Then, heat them together to eat them again.

This soup will also freeze well for up to 3 months.

Yes, this is an easy recipe. There’s some chopping involved, but it all cooks in 1 pot and will be ready in about an hour!

Not as the recipe is written, no. All you have to do to make this soup vegan is use vegetable broth instead of chicken. That’s it!

Is Mushroom Barley Soup good for you?

Yes! This soup is low in fat and is packed with vegetables. It’s also low in calories so that you can splurge on dessert! 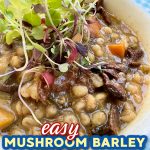