Are you looking for an absolutely delicious pot roast that requires almost no effort at all? Look no further because you’ve found it! This Crockpot Pot Roast is the BEST EVER, only requires 5 ingredients, & is as simple as throwing the ingredients in your slow cooker and turning it on. Perfection! 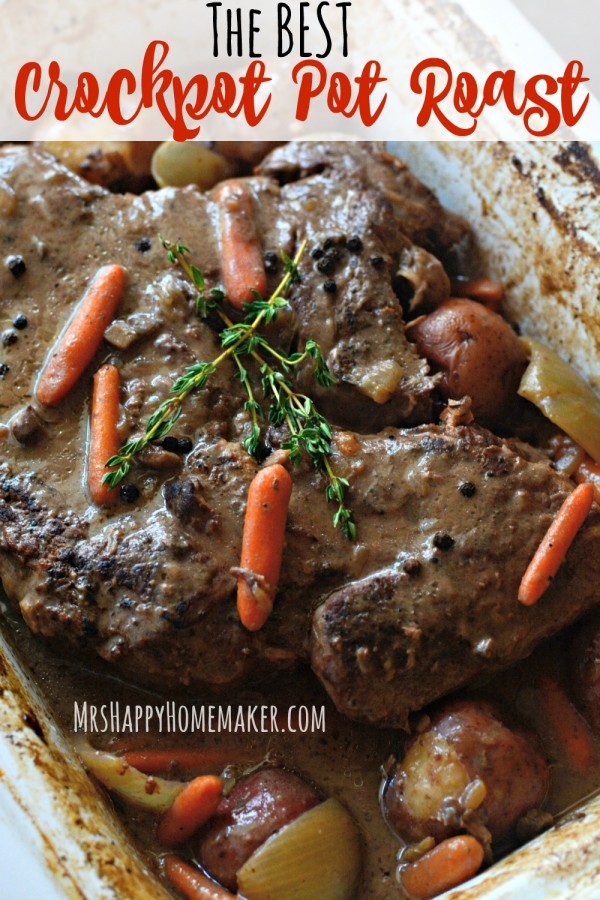 When I was a kid, pot roasts had to have been my least favorite meal. Well, except for the bran flakes my parents made me eat for breakfast (because fiber – thanks Mama). I seriously would sit there & pick at it and as soon as my parents were distracted, I’d call the dog or cat over. Or wrap it in a napkin, hide it in the trash, & cross my fingers and toes my parents didn’t realize what I’d done. The bran flakes, on the other hand, weren’t so easy to dispose of. The dog had zero interest in those (that should tell you something! haha)… so they required meticulous timing so that both my parents were otherwise distracted so that I could make it from the dining room table to the bathroom undetected so that the toilet could have my bran flakes for breakfast. Yes y’all – I totally used to flush my bran flakes down the toilet. Sorry, mom but they were gross!

Anyhows – where I was going with that was that I’m so glad that our taste buds change like every 7 years because these days – pot roast is one of my favorite foods. At least, it is when it’s prepared this way. The meat is spoon tender & flavored perfectly… and the same can be said about the veggies in it. And the gravy… oh honey, I’m Southern & I’m all about gravy. (I’m all all about that gravy, ’bout that gravy – No tofu)

This pot roast has plenty of gravy & it’s all sorts of delicious… perfect for sopping up with some of my Mama’s buttermilk biscuits, or my 3 ingredient no-fail biscuits – or heck, even plain white bread. Sometimes I’ll mash up the potatoes on my plate with my fork and swirl it all together with that yummy gravy. All 3 of my kids shovel this in their mouths & always ask for seconds and thirds. Well, ,my 5 year old doesn’t ask for seconds of the carrots but hey – he’s 5.  When my husband was still alive, he’d straight out refuse anyone else’s pot roast. Actually, he straight up hated pot roast (or so he thought) until he tried mine. It’s perfection you guys. 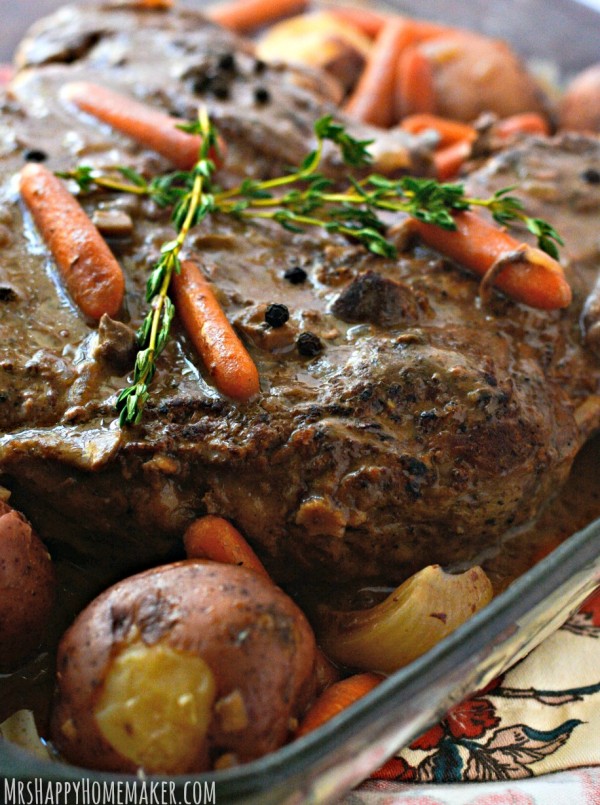 Have I mentioned how easy it is to make this? If I have already, oh well – you just heard it again. 😉  Only 5 ingredients (not counting pepper) – well, 6 if you decide to add onions. It cooks in the crockpot all day, so you don’t even have to mess with it. Plus, it makes your house smell amazing. You may need to nail up a couple of ‘No Trespassing’ signs before putting this in your slow cooker for the day because those pot roast vapors are so indulgent that you may begin to lure your neighbors, mail man, school bus driver, & a couple of neighborhood dogs to your kitchen in some sort of hypnotic trance. Well, heck – I guess if they’re in a hypnotic trance… those no trespassing signs won’t do much good, huh? 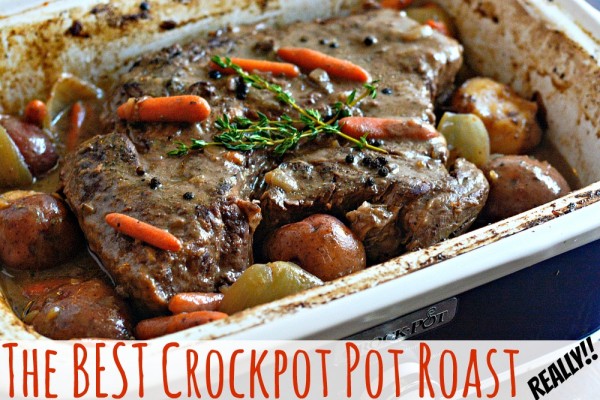 Ready to get started?

Here’s what you need take this delicious Crockpot Pot Roast: 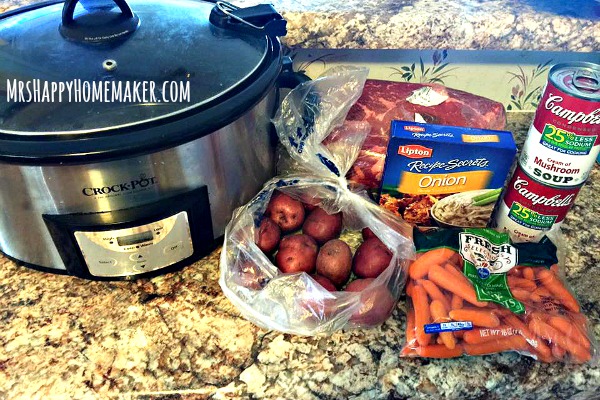 Season a 4 to 5 pound (sometimes I even use a 3.5 pound) chuck roast with pepper. Sometimes I sprinkle on some garlic powder too just for kicks. I usually sear the seasoned roast off in a little melted butter in a hot skillet on both sides, but that’s not necessary. You can throw the meat in without being seared as well. I do think it makes a difference in the finished product if you’re able to take that step though.

Place the roast in a large crockpot. If I’m using a standard crockpot (like an oval or a round one), I will use a 5 or 6 quart one. I also really like using my 9×13 crockpot for this.  While it only holds 3.5 quarts, the shape of it makes it perfect for this recipe. Arrange potatoes, carrots, & onions (if using) in the crockpot too. You can use any kind of potato – just cut them into large chunks. I actually had some very small red potatoes on hand, so I used them and didn’t have to cut them since they were so small already. I also use baby carrots that have already been washed & peeled because that’s one less step for me. 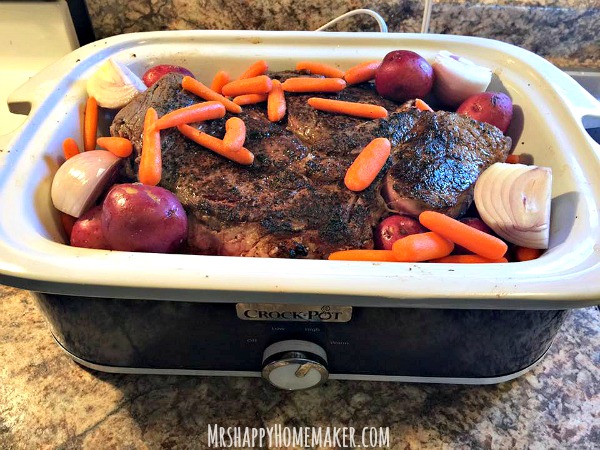 In a bowl, combine 2 cans of low-sodium cream of mushroom soup with 1 envelope of dry onion soup seasoning . 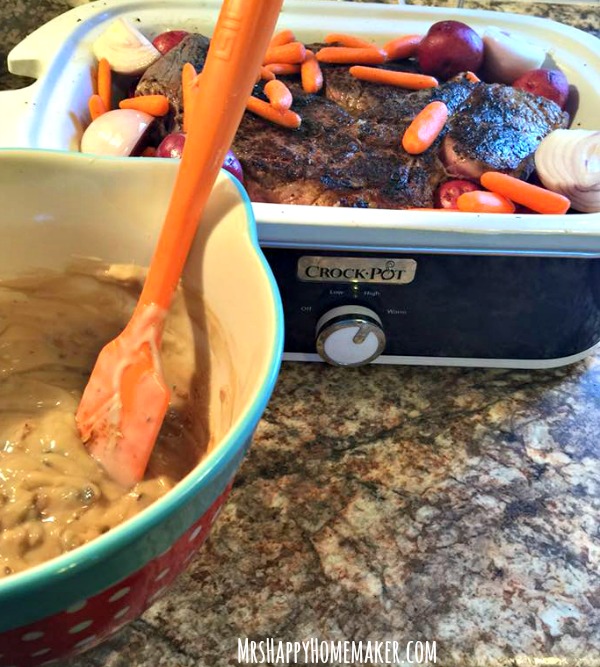 Spread the mixture over the roast. It will be thick, but as the roast slow cooks all day it will begin to mix with all the juices coming from the pot roast and form the most magnificent gravy! 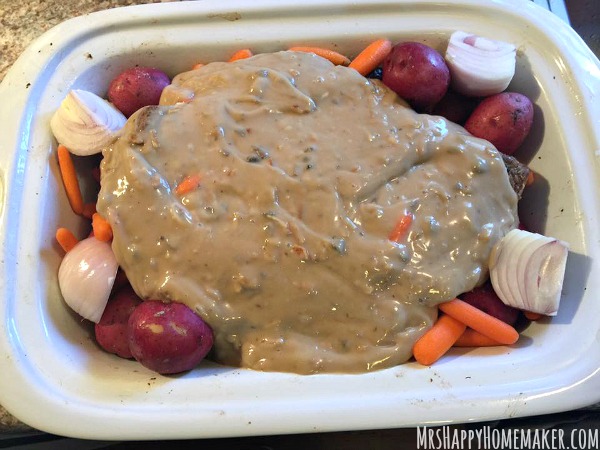 Cover your slow cooker with the lid & cook on low for 8-10 hours. You can cook it on high for about 4-5 hours as well, but I don’t recommend it because the pot roast isn’t nearly as tender as it is when you cook it on low. And boy, is it tender when you’ve let it slow cook on low all day. So, so good – you’re in for a serious treat! Sometimes, I’ll put the crockpot on high for an hour and then slow cook for about 7 hours… but usually I stick to the low & slow. 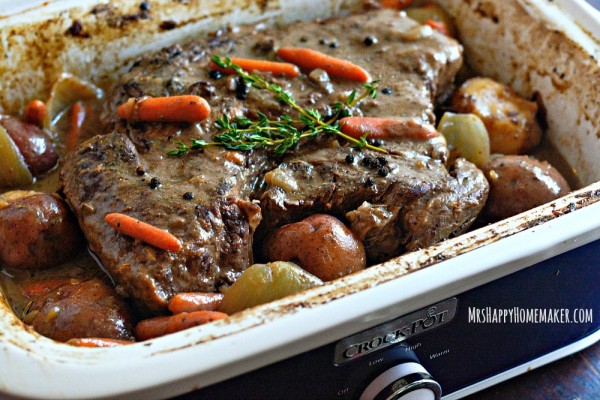 This is the best pot roast I’ve ever eaten.  It’s SO good, y’all! 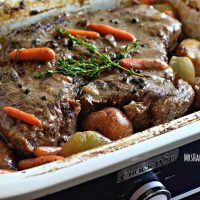 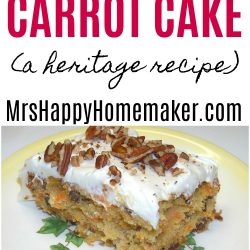