Watergate Salad, with its distinctive color and flavor, is a classic and a hit at every event. This salad couldn’t be easier, and it’s ready in a jiffy, making it the perfect pick whenever you’re in the mood for a light, sweet, and delicious salad!

I love this salad. I love serving it at potlucks, BBQs, and family events, but it’s also an amazing Christmas salad thanks to its pretty green color and with a cherry on top, it has all the holiday colors.

I also love how quick and easy it is to make this tasty salad. It’s a dump-and-go dish, meaning everything goes into one bowl, and the whole dish is mixed until creamy and perfect. Plus, it’ll keep in the fridge for a few days, so make it ahead of time and then just grab it when you’re ready to serve.

Another great thing about this recipe is that I can keep the ingredients on hand for a long time, so I can whip it up when I need a last-minute salad or dish. Everything is shelf-stable, and you can pop the Cool Whip into the freezer and thaw it before using it.

With flavor, crunch, and deliciousness in every bite, I’m sure you’ll love this salad!

Why Is It Called Watergate Salad?

The story goes that this salad was created and served at the Watergate Hotel, and it gained in popularity during the political scandal of the same name. It has also been suggested that Kraft created this salad recipe to promote their pistachio pudding and called the recipe Pistachio Pineapple Delight.

Watergate Salad is also known by various other names, including Pistachio Delight, Green Goddess Salad, Shut The Gate Salad, and I’ve even heard it called Green Goop and Green Fluff. No matter what you call it, it’s a fun and tasty dessert salad recipe!

How To Make This Easy Watergate Salad

Watergate Salad will keep in an airtight container (or cover the bowl with plastic wrap) in the fridge for 5-7 days. If you use fresh whipped cream instead of Cool Whip, it’ll only keep in the fridge for 2-3 days. 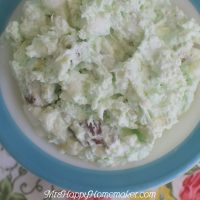 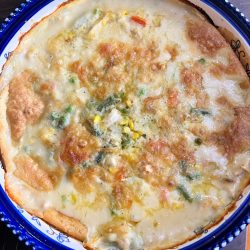