This Spinach Artichoke Alfredo Dip is the best I’ve EVER had! Only 7 ingredients mixed together & baked is all this easy appetizer needs! 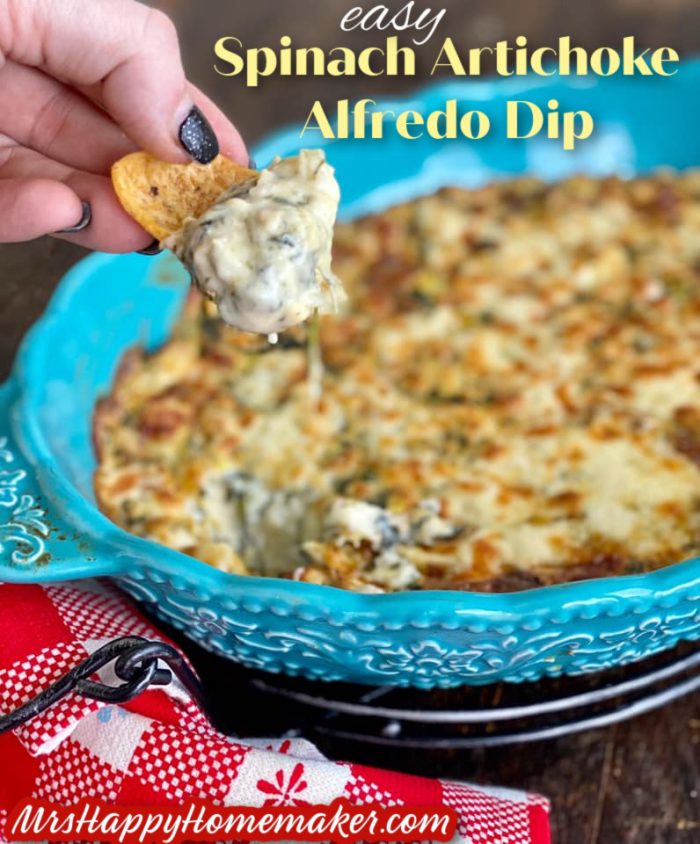 You can find the printable recipe & a video of yours truly (Mrs Happy Homemaker) making this recipe!

I’m such an appetizer girl. My favorite thing to get when I go out with my friends to restaurant is several small plates or appetizers to share amongst us. I love appetizers of all kinds but I’m such a sucker for a good dip.

And I just don’t have appetizer feasts when I’m dining out – I do this at home too! I really enjoy a good ‘snacking’ kind of meal. One of my favorite dips to make at home is my Spinach Artichoke Alfredo Dip. It’s so good, I actually prefer it to any sort of spinach artichoke dip that I’ve ever had at a restaurant – and that’s saying a lot because I’ve had some really delicious ones! 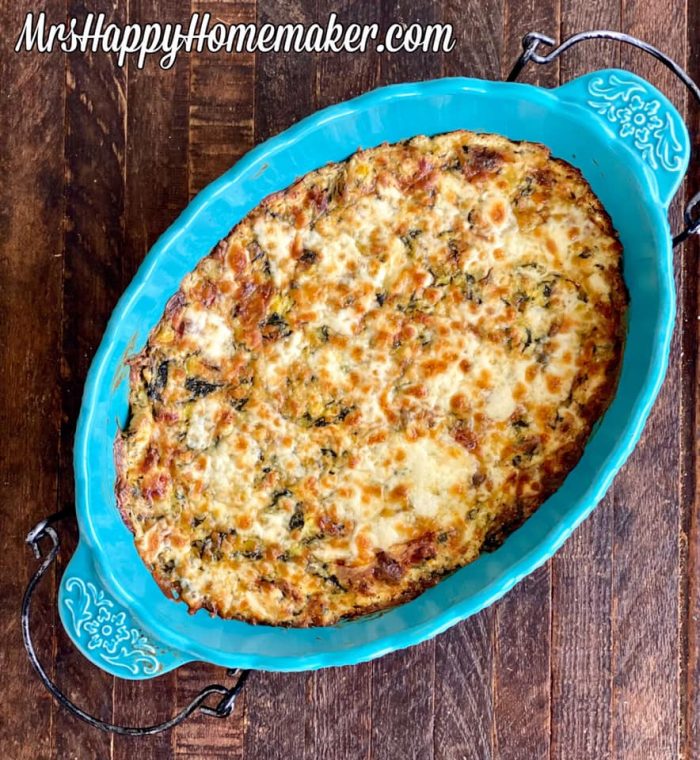 Well, I was a huge couponer. I was the lady you hated to get behind in the grocery store line because I had approximately 1,424,532 coupons on me at each and every time. We would go to the store and get all the groceries in my cart for free with the coupons. Sometimes the store would even end up owing me money! It took a ton of planning and was like a full time job on it’s own… For a period of time though, I couponed my behind off! You better watch out for me as soon as the store opened on triple coupon week because I was ready to go 😉 haha 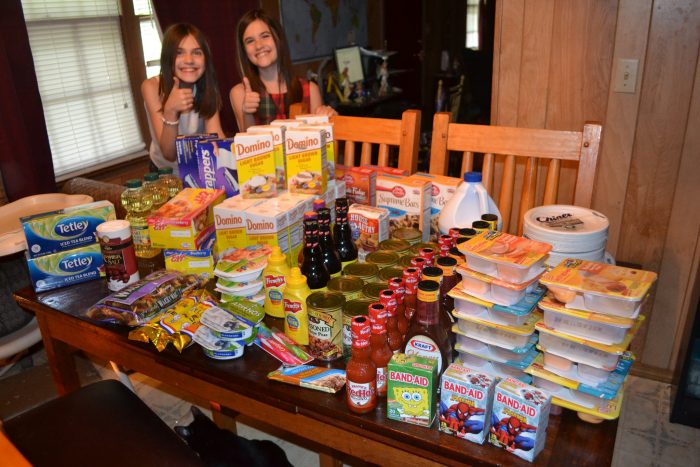 Back in my couponing days – all this was $11 after my coupons!

With coupons, I ended up getting a large stockpile of it for free. I gave a lot of it away to the food pantry, but it was something that I was always able to get for free when Harris Teeter tripled coupons, so I started experimenting with ways to doctor it up.. and this recipe came out of all that recipe testing.

I still don’t like jarred Alfredo sauce – but I will always have a jar of it in my pantry for this amazing recipe right here. It’s PHENOMENAL and I don’t say that likely. 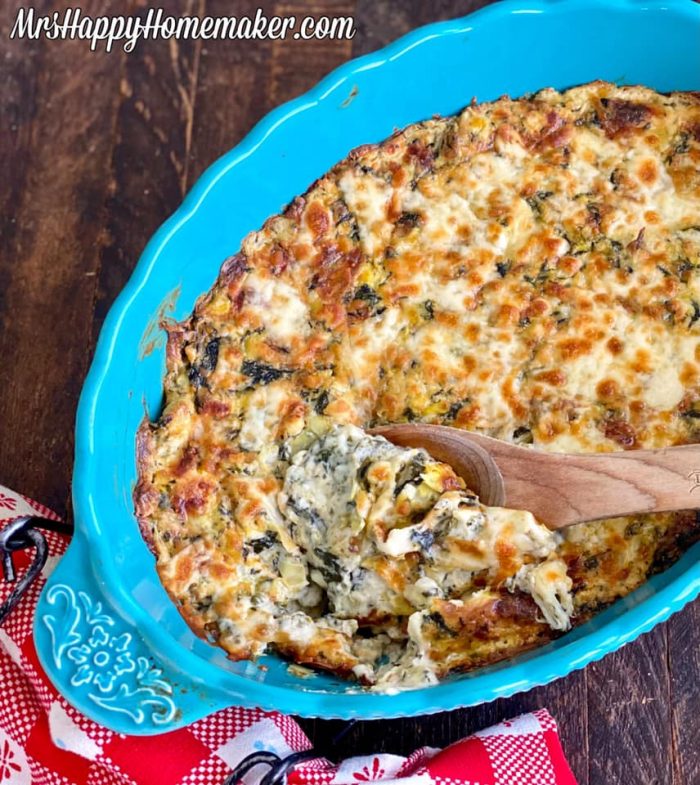 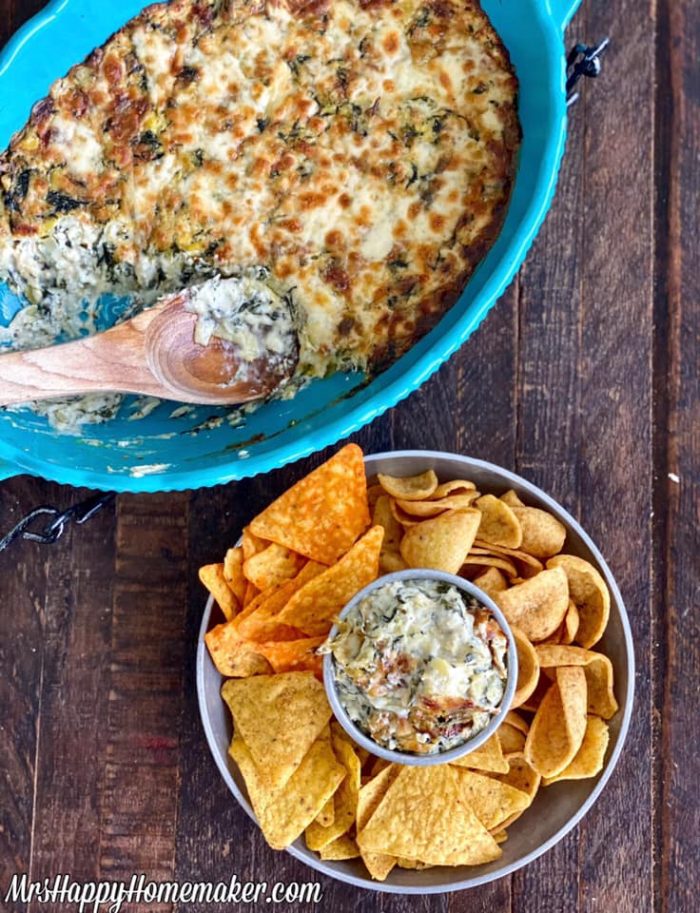 If you thin it out with a little milk – it makes the BEST pasta sauce. A pasta sauce that’s so good, you wouldn’t never ever guess in a million years that it had a jar of pre-made Alfredo sauce in it. Just mix in some cooked pasta with it and my oh my – you’re in for a real gourmet tasting treat! 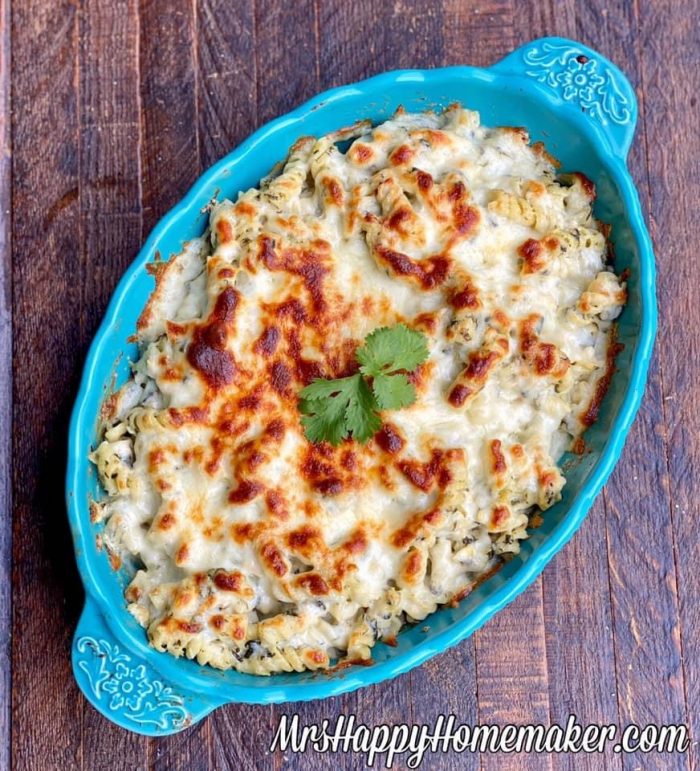 So, are you curious yet? Let’s make this recipe!

What ingredients do I need to make this Spinach Artichoke Alfredo Dip?

Here’s your cast of ingredients: 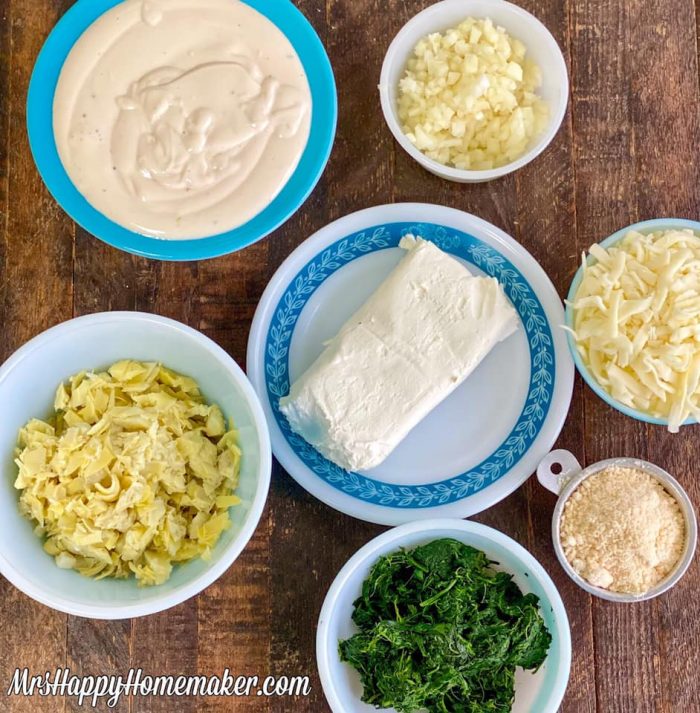 How do I prepare this Spinach Artichoke Alfredo Dip?

You literally just combine all the ingredients together in a bowl, reserving 1/4 cup of shredded mozzarella for later – and then spread it into a 2 quart casserole dish. 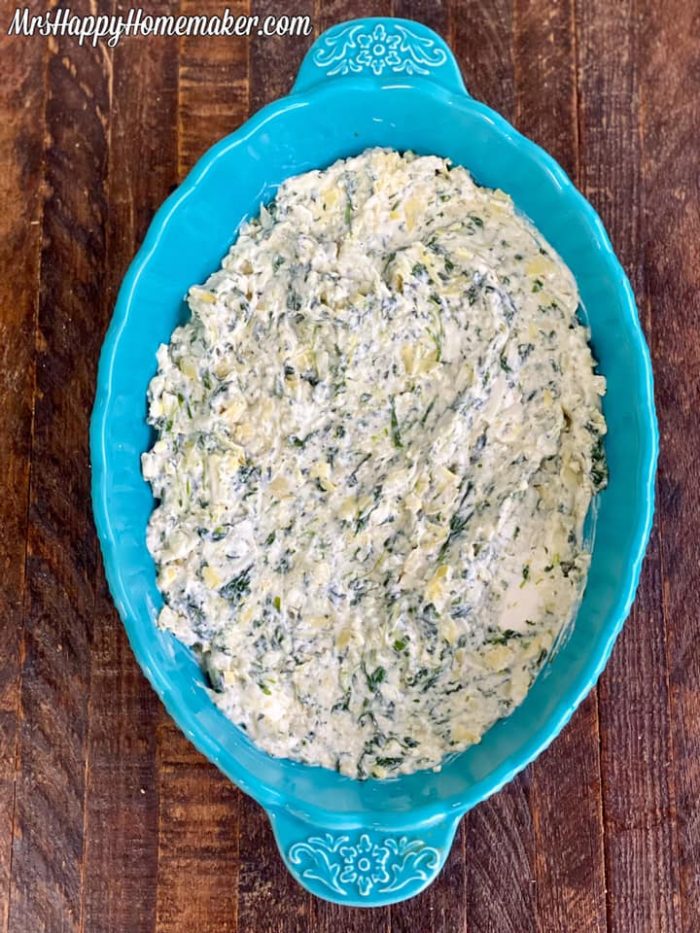 Bake it at 350 degrees for 30 minutes. Then, remove it from the oven and sprinkle on the remaining 1/4 cup of mozzarella cheese. 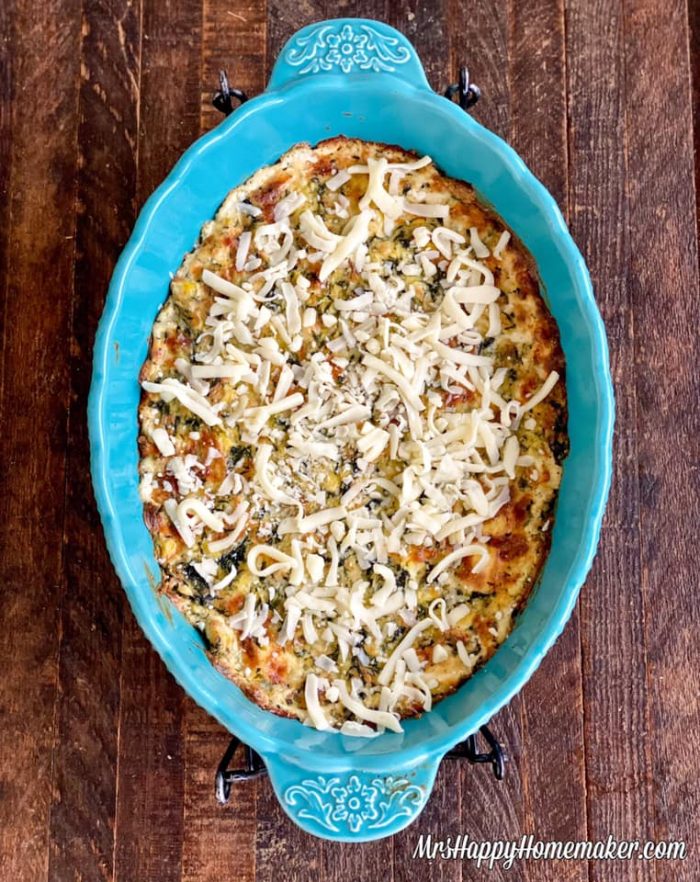 Place it back into the oven and cook it a few minutes longer, just until the cheese is melted. 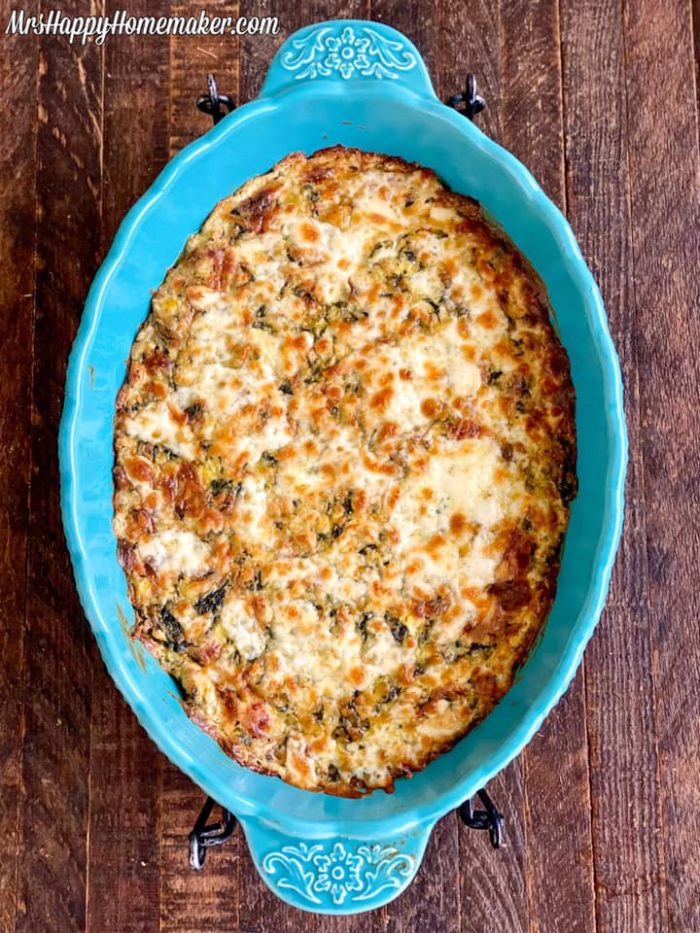 Serve with sliced raw vegetables, or spread on crostini – or my personal favorite, dunk tortilla chips (or Doritos, those cool ranch Doritos and this dip… they go really well together!) 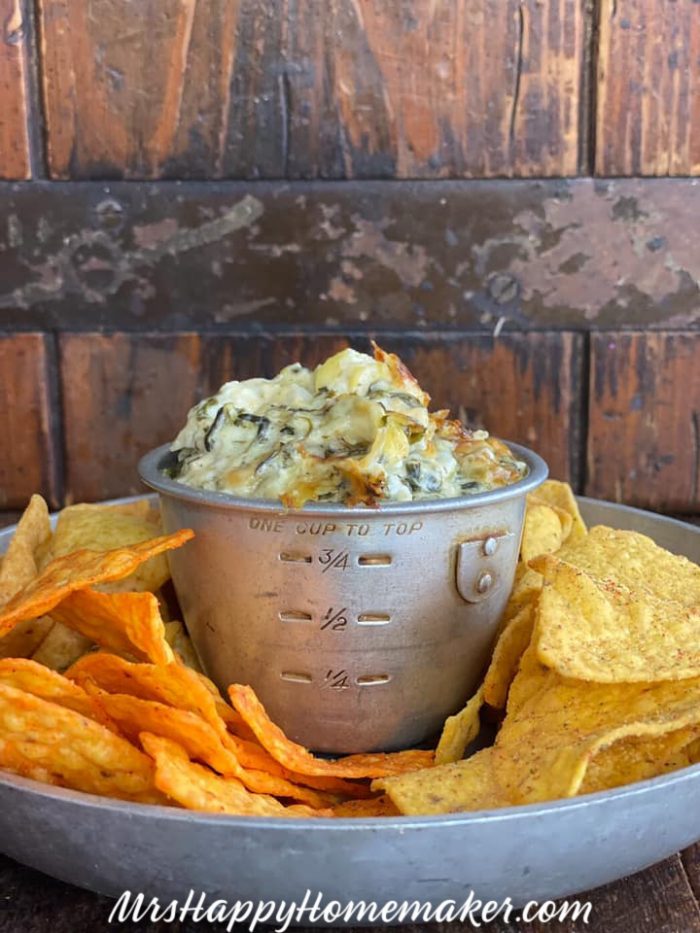 Can I make this in my crockpot?

Yes, you sure can!

Mix all the ingredients together, just like you would for oven preparation, and reserve 1/4 cup of mozzarella. Spread the mixture into your slow cooker and cook on low for 4-5 hours or high for 2-3 hours. When it’t hot and bubbly, sprinkle on the remaining 1/4 cup of cheese and place the lid back on it and cook until the cheese is melted, which won’t take long at all.

How do I make a pasta sauce out of this dip?

All you need to do to make this a pasta sauce is to thin it out a with a little milk and stir – until it’s the consistency that you like. You can do this with the dip baked in the oven, with the whole batch or just the leftovers from the dip. You can add a little milk to the crockpot at the end of cooking and stir and wah-lah – instant pasta sauce! You can also mix all the ingredients in a sauce pan over low and then once it’s hot, add some milk – a little at a time – until it reaches the consistency that you like. 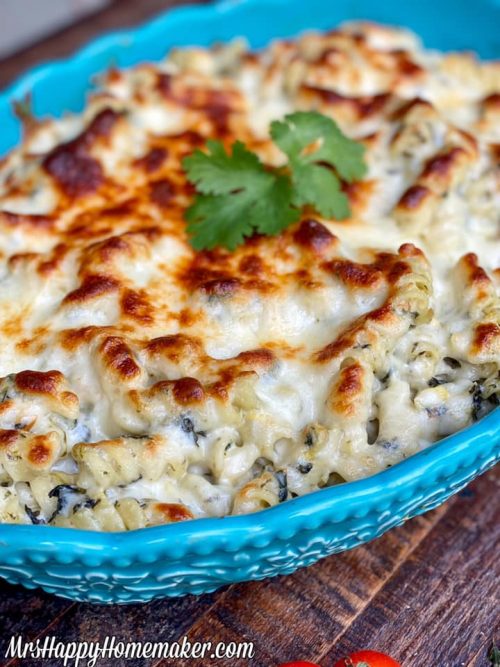 This Spinach Artichoke Alfredo Dip has been one of my family’s favorite recipes for over 2 decades now. It’s definitely tried and true and always a hit! Whenever folks come over and I make this, everyone wants to know the recipe and is always surprised when they find out how easy it is and that it incorporates a jar of Alfredo sauce in it!

If you make it, I’d love to see a photo! Post it on Instagram and tag it #MrsHappyHomemaker and you could be featured!

Scroll down for the printable recipe and for a video tutorial of yours truly making it! 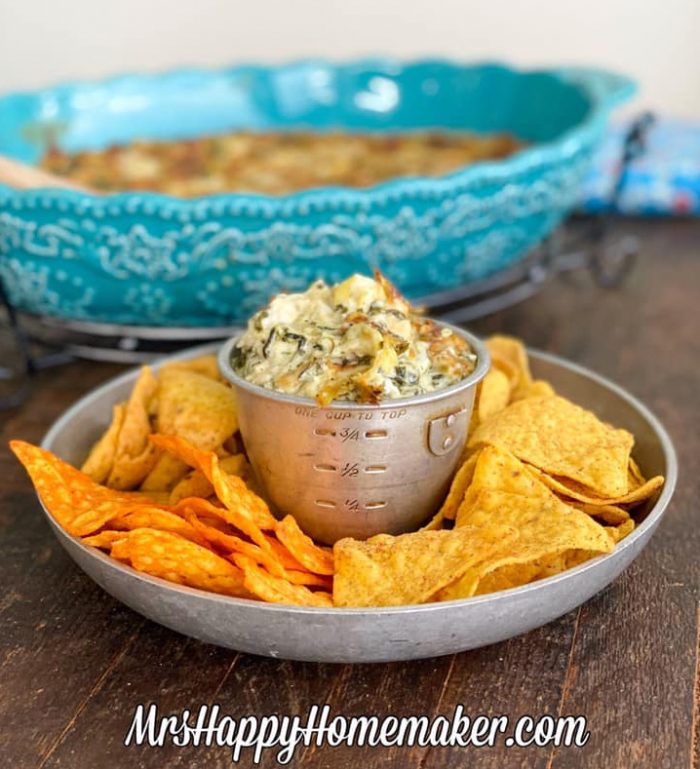 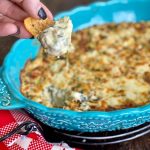 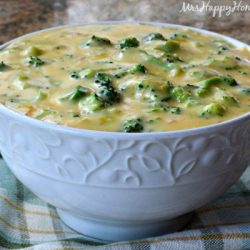